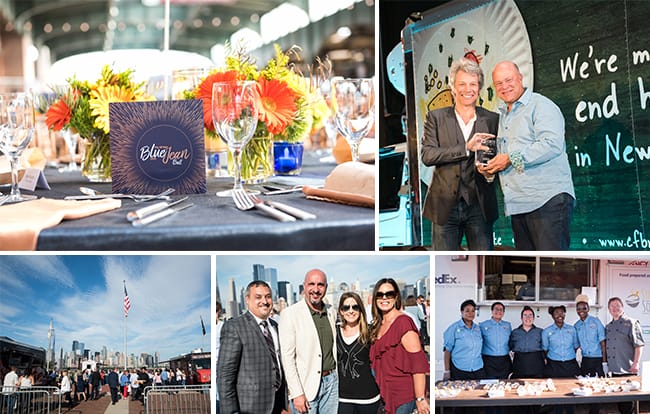 The Community FoodBank of New Jersey held its All New Blue Jean Ball on Saturday, June 16 at the Central Railroad Terminal in Liberty State Park. Historically a low-key affair, the annual gala was revamped, reimagined, and reinvigorated this year with a sophisticated style that drew 465 guests, whose generous donations raised nearly $1.2 million to benefit the FoodBank’s hunger relief efforts.

The event was chaired by members of the Community FoodBank of New Jersey’s Board of Directors—Alma DeMetropolis, Robert H. Doherty, and Roby & Josh Weinreich.

Afterwards, the festivities moved inside for dinner and an awards presentation honoring FoodBank supporters who have exemplified the three core values of food, help, and hope. The formal program was emceed by New Jersey’s own Adam Sank.

The FOOD Award was presented to Goya Foods, Inc., a significant provider of food for New Jerseyans in need through donations to Feeding America, the Community FoodBank of New Jersey, and a host of local pantries, soup kitchens, and after-school programs.

“As a New Jersey-based company, Goya strives to give back to the community,” said Bob Unanue, President of Goya Foods. “We are proud to work with the FoodBank to further their mission of addressing hunger as a health issue by helping to provide access to nutritious, culturally appropriate meals.”

This year alone, Goya has donated 100,000 pounds of food to date through the Goya Gives ‘Can Do’ campaign, teaming up with the New Jersey Devils and Prudential Center employees to sort and bag some of the food for distribution.

Philanthropist David Tepper, Founder & President of Appaloosa LP, received the HELP Award for his generous financial support of the FoodBank and consistent advocacy for those in need. His foresight bolstered the FoodBank’s resilience during the recession, Superstorm Sandy, and the collapse of the Atlantic City economy.

“Hunger is everybody’s concern and everybody’s responsibility,” Tepper told us. “An investment in supporting our New Jersey neighbors pays back dividends in a million different ways, feeding families next door and fueling the futures of our kids.”

Rocker Jon Bon Jovi lent some star power to the event, attending the All New Blue Jean Ball to show his support for the fight against hunger by presenting David Tepper with the HELP Award.

“It’s a privilege to honor my friend, David Tepper, with the HELP Award at the All New Blue Jean Ball,” Bon Jovi said. “David understands the need to help his community and pursues his philanthropic investments with the same rigors he does any business endeavor. He knows that together, we can solve the problem of hunger in New Jersey.”

“The FoodBank is fortunate to have dedicated partners who share our goal of eliminating hunger and poverty in New Jersey communities,” said Carlos Rodriguez, President & CEO of the Community FoodBank of New Jersey, “With food from Goya, help from philanthropist David Tepper, Founder & President of Appaloosa LP, and hope from our devoted volunteers, we are able to work towards our mission of feeding and empowering our hungry neighbors.”

After the awards presentation, guests enjoyed comedic entertainment by Colin Jost, Co-anchor of Saturday Night Live’s Weekend Update. The evening concluded back outside with a moveable feast of desserts crafted by the food trucks.

“The FoodBank is deeply grateful to the All New Blue Jean Ball chairs, sponsors, and attendees for their support of our mission,” Carlos Rodriguez said. “We’ve exceeded our fundraising goal and honored a few of the FoodBank’s most committed supporters. Every dollar we raise is more that we can do for our neighbors in need. I’m proud of what we’ve accomplished.”

Click here to see more photos from the event.