Cooking His Way to a Better Life 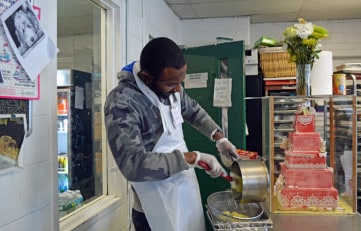 The one thing our Food Service Training Academy students have in common is their passion for cooking.

For 28-year-old student Rasheed, he joined the Academy to gain a skill he can pass on to his son.

Rasheed had “run-ins with the law” and he sees the FSTA as a step toward a better life, a life he can be proud to share with his 2-year-old, who is also his inspiration. Even on days when he feels like quitting the program because of challenges in his personal life and in the kitchen, he pushes forward to set an example for his son.

Halfway through the 16-week course, he’s surprised by how far he has come, especially where baking is concerned. He only knew how to make cookies out of a box before the FSTA, but now he can prepare bread, pie and more.

He admits he caused trouble in the past, and he wants to “go back to that same community and spread a different message and a different type of energy.”

How’s he going to do that? He plans to spread positivity throughout Newark with food.

Opening a food truck would be his “way to stay in tune with the community,” Rasheed explained.

“I want to direct it at the community I’m dealing with,” Rasheed told us about his dream food truck. “I want it to be a lunch truck where we serve healthy and affordable food options.”

He explained that in his neighborhood there are many unhealthy convenience foods people rely on, which is why he wants to make a difference with food.

Rasheed has already recommended CFBNJ’s tuition-free culinary program to others, including his cousin, who is getting in trouble with the law.

“He’s going through the same things I did,” Rasheed told us.

He told his cousin – and would tell anyone else – that “this [program] is the perfect start” to a better life.