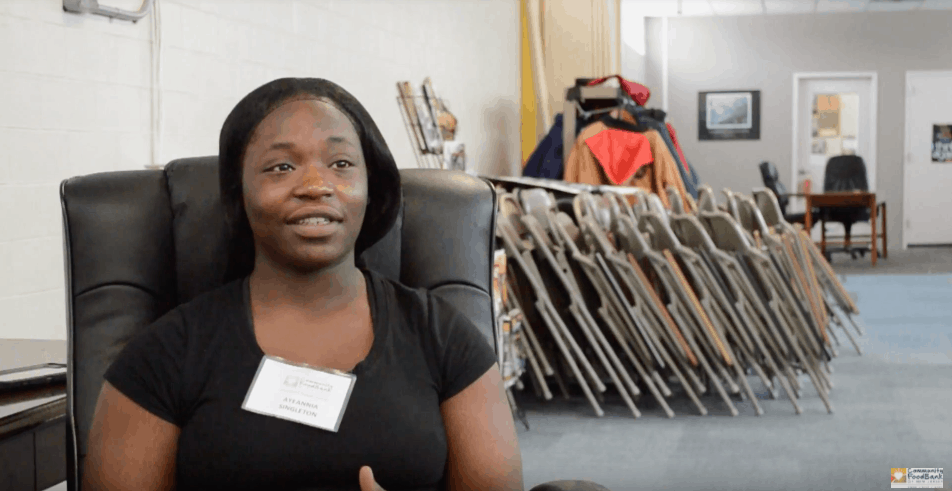 From a young age, Ayeannia found her “happy place” – the kitchen.

After years of dealing with family issues and facing numerous obstacles when trying to reach her dreams, she walked into our Community Kitchen as a student of the Food Service Training Academy (FSTA).

We’ve been shadowing her throughout the weeks, hearing her backstory, what brought her to the FSTA, how the program is going, and what she hopes to accomplish after graduation.

Ayeannia moved around a lot as a kid. Her mother left her when she was only a few years old, and she was raised by her uncle who had 10 other children. When her uncle would leave for work, she was left home with a houseful of kids and an abusive aunt.

It was in this house that she found her happy place while making pancakes.

“I made my first pancake, and I remember I was super-excited,” she told us. “I’m pretty sure it was burned, but I was working with the stove. So, whenever I need to go to my happy place, I think about when I was a kid and I first touched the stove.”

At about 12 years old, she was sent to live with another uncle and his wife, helping them around the house. Then, one day, they told her she was going to visit her mother for the weekend. They never returned to pick her up.

“I realized it was going to be real difficult because my mom wasn’t the most responsible parent,” Ayeannia said.

She told us she grew up quickly because she needed to take care of herself, as well as her younger sister. Her mother would leave them alone for weeks, and Ayeannia stepped up, preparing food with whatever there was around the house.

“I’ll be at the house trying to be Top Chef, trying to make things out of the little bits that we did have, so my sister wouldn’t know what it’s like to be hungry,” she said.

To make sure her sister had something to eat and that they had a place to live, Ayeannia started working as a hairdresser.

When she was 16, she decided to move out. She graduated high school and wanted to study culinary arts, but school wasn’t affordable. She worked at Macy’s for about seven years, during which time she volunteered at the FoodBank.

Today, she’s the mother of a 3-year-old, a waitress and an FSTA student. She’s faced a lot of challenges in her life, but when she talks about our culinary program, her smile widens because she’s back in her happy place.

“I’ve always wanted to be a chef because when my whole world is total chaos, any kitchen helps me enter my happy place,” Ayeannia explained.

Challenges arise in the program – everything from tests to dealing with a team – but she told us it’s worth it because she learns something new about cooking, baking and herself every day.

After graduation, she hopes to further her education by shadowing the same chefs who have been teaching her in our Community Kitchen. Then, she wants to open a youth center with a culinary program.

“[The FSTA is] the first thing I’ve wanted to do in a long time,” she told us.

She is nearly halfway through the program, and she just completed the in-house component of the Academy. This week, Ayeannia began the baking portion of the FSTA, which has her feeling “nervous and excited.”

As for us, we look forward to keeping up with how she’s doing over the next few weeks, and we’ll be rooting for her to graduate and reach her dreams. Stay tuned for our next update!

Check out Adrian’s story, as well.