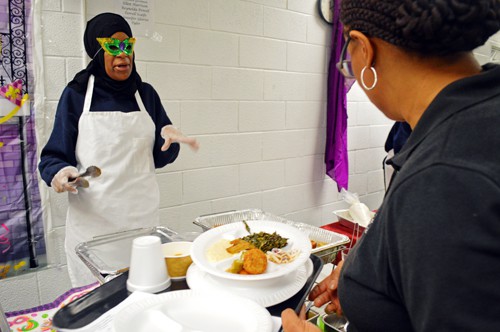 She laughed for a moment and realized the truth in her statement.

She enrolled in the FSTA’s October 2015 class. Although she faced challenges along the way, she pushed forward and will graduate tomorrow night.

For Ellen – and for many other students – the program helped solve deeper personal issues.

Here is her story.

Ellen gained an interest in cooking when she was about five or six years old. She regularly watched her mother prepare dinner. But, no matter how committed she was to learning the ins and outs of the kitchen, she ran to the television when “I Dream of Jeannie” came on.

“I’ll be in the kitchen helping my mom, but then when I hear the [theme song], I’ll run to the television, do my little shimmy thing, then I’ll go back to the kitchen with my mom and resume watching and trying to help her,” Ellen said.

Ellen faced challenges growing up, including one that led her to move into transitional housing for a few months. She later worked at The Apostles’ House in Newark for two years, which is what inspires her to manage her own food pantry; her experience allowed her to realize how many people need help.

As a single mom in Newark, Ellen worked in corporate banking and raised her three boys with help from her mother. Everything seemed to be going well, until her mom passed away.

She moved out of Newark, sought emotional support, remarried and enrolled in the FSTA.

The FSTA gave her a chance to strengthen her culinary skills, as well as enhance her ability to face challenges.

There were lessons within the program that pushed her to keep going, no matter how difficult. There were also personal events – including the death of a friend – that led to absences and probation.

Halfway through the program she found herself “frustrated;” she had a lot of things on her mind and felt like she was falling behind.

She picked herself up, with support from her instructors and peers, and refocused. Ellen was determined to prove to herself that she could do it and wanted to set an example for her children.

“The things you go through in life, some weeks are better than others,” Ellen said. “But I still have to press on.”

She worked on her baking skills, learned the importance of presentation and prepared for exams.

Ellen also succeeded at the hands-on roles within the program. When it was time for her to be sous chef, she led the team of students with her partner in cooking lunch, and learned that time management and communication are key.

A la carte gave her the chance to experience working in a fast-paced kitchen by cooking ordered meals, which taught her that “efficiency is very important,” as are organization and presentation.

She learned to push herself with the motivation she had from her instructors and peers. The academy introduced her to people she now calls friends, allowed her to ask questions and provided her with emotional support.