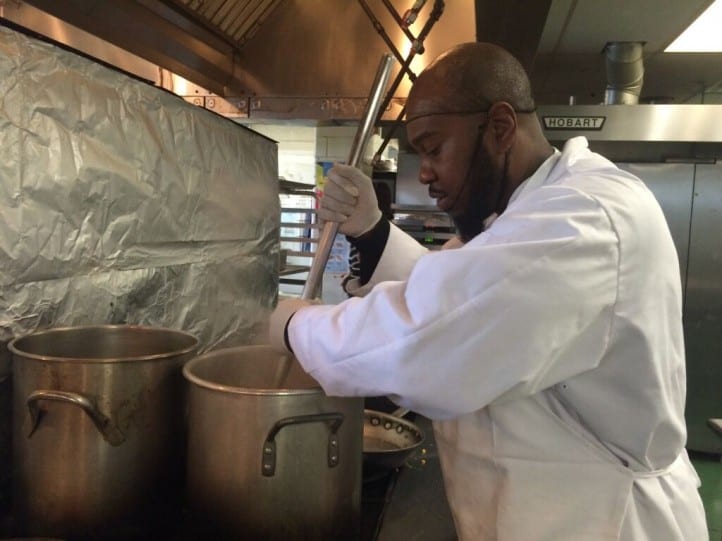 Tonight will be Robert Sanders’ second graduation. His first graduation was from preschool.

What excites him most?

“Just being up there,” he said. “Knowing that I’m going this way, not that way.”

Our Food Service Training Academy provided Robert with an opportunity to move away from his troubled past.

Here is his story.

Robert was “part of the problem for too long” and the FSTA gave him a chance to start over — twice.

The first time he enrolled, he was in a halfway house. He knew he enjoyed cooking, and the program was his opportunity to learn.

About a month before graduation, a counselor from the halfway house saw Robert driving a car to work, which went against the terms of his release. This sent him back to jail.

Robert’s second time at the FSTA was different; he knew he needed to commit to the program because he did not want to disappoint himself or those who believed in him.

He needed to prove something to himself. He also felt like the FSTA would be his chance to start over — again.

“When people see me, I want them to see something different than what they used to see,” Robert said.

The 16-week program taught him about cooking, baking and life. Most importantly, he learned to work with others, an item he formerly found challenging.

“The atmosphere here, the camaraderie, it’s close-knit,” Robert said. “I come in here working with my fellow students, working with the chefs and with the culinary assistants. It strengthens your teamwork.”

This time at the academy, Robert focused on becoming a better cook and person.

He had internships, including several opportunities at the Jacob K. Javits Convention Center in New York. He received motivation from his peers and instructors. He created goals for himself; he wants to become a master chef.

Although Robert faced challenges throughout the intense program when it came to knife skills, baking and written exams, his passion for cooking and hope for a new life encouraged him to push forward.

“They say there’s always something good that comes out of a bad situation,” Robert said.

For him, this expression came true.

“I proved to myself that I could do the things I thought I never could.”