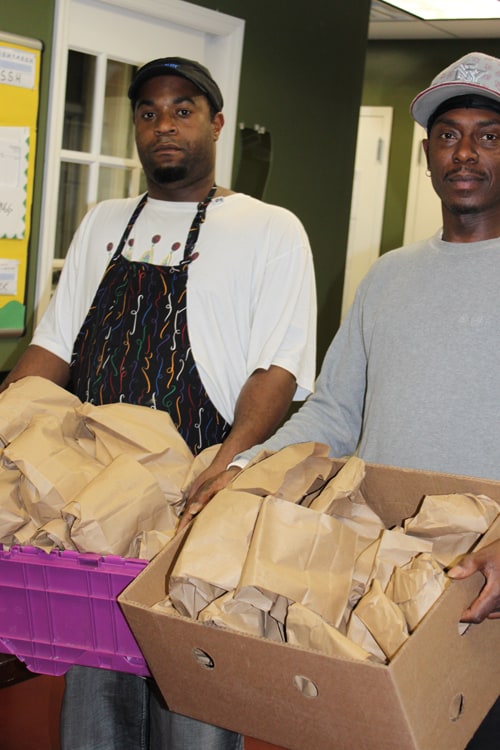 Amidst the hustle and bustle of Hoboken, a block or two from high-end restaurants and shops sits the Hoboken Shelter.

It’s lunchtime on a Friday and the line stretches from the front door down the block as the shelter prepares to open for another meal. The Hoboken Shelter serves 300 meals per day, and shelters 50 people each night. The nonprofit helped 123 people find housing and 117 people find employment in 2010.

“We are very mindful of respecting everyone here. They are human beings who come to us from all walks of life and just need some assistance to turn things around,” says Jaclyn Cherubini, executive director.
The shelter provides much more than food and a place to sleep. There are a myriad of activities daily, including counseling, job and life skills, arts workshops, board and video games, and much more.

“We couldn’t do a lot of this without the Community FoodBank. We get all of our staples from the FoodBank, coming from the SFPP (State Food Purchase Program) and USDA allocations,” says Cherubini.

Cherubini often works from 10 am to 10 pm, leading a dedicated staff of nine employees that keep the place running 24/7. Among them is longtime staffer James Shipman, who oversees the robust volunteer program.
Like many of the partner agencies of the Community FoodBank of New Jersey, the Hoboken Shelter relies heavily on volunteers. In the past year, 3,000 volunteers donated their time to prepare and serve meals as well as conduct workshops and offer services such as free hair-styling and makeup help for women in the shelter.

“The volunteers do everything for us. They donate money, donate food, come here and prepare and serve the meals in a dignified way,” Cherubini says.

The Hoboken Shelter has many success stories. Two of these are Raheem and Tyrone. The pair came to the shelter having previously lived on the street years ago. Both are currently living at the shelter and are ready to take the next steps in their lives.

Among the next steps for both gentlemen is taking classes at the Food Service Training Academy at the Community FoodBank of New Jersey. They were accepted into the class that begins on April 25.

“We are ready to do whatever is necessary to go through this tough program. It is the next step in our lives,” Tyrone says. 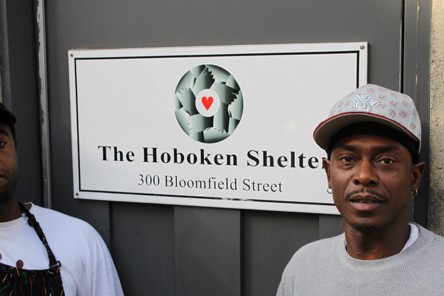 The pair recently spearheaded a new Outreach plan for the shelter. Over one weekend in early March they handed out 40 bagged lunches and spread the word about the shelter to the homeless living on the streets of Hoboken. That type of ingenuity will serve them well in the FSTA.

The Hoboken Shelter celebrated its 30th anniversary in 2010. At that point the organization had served 400,000 meals and helped 1.5 million people since opening its doors in 1982. Like many of the partners of the Community FoodBank of New Jersey, the Hoboken Shelter has seen an explosion in the need for its services. The shelter has been able to keep up, doing it all with a sense of family.

Our 1,000+ food pantry & feeding program partners across NJ are the boots on the ground in the fight against rising hunger. Side by side with ...them, #WeAreThere for those still struggling from the effects of the pandemic.

Help us continue our work: https://www.cfbnj.org/#WeAreThereSocial

Lightbox link for post with description Our more than 1,000 food pantry and feeding...

Our more than 1,000 food pantry and feeding program partners across New Jersey are the boots on the ground in the ongoing fight against rising ...hunger. Side by side with them, #WeAreThere for neighbors who are still struggling from the effects of the pandemic.

🙏 Find a CFBNJ community partner near you: https://cfbnj.org/findfood/

🍽️ Help us continue our critical work supporting pantries throughout the state: https://www.cfbnj.org/#WeAreThereSocial

Suzanne, our Women Fighting Hunger Programs Co-Chair, recently shared her family's inspiring story of multi-generational volunteerism. Read all ...about it and sign up for a volunteer shift of your own! We are greatly in need of helping hands ages 12 & up: https://cfbnj.org/volunteer-spotlight-three-generations-of-women-fighting-hunger/

Suzanne, our Women Fighting Hunger Programs Co-Chair, recently shared her family's inspiring story of multi-generational volunteerism, telling ...us that, "Becoming more aware of food insecurity and its impact on young people has been eye-opening."

She volunteers regularly at CFBNJ with her daughter and her mom, who's also a committed donor.

Read her full story and sign up for a volunteer shift of your own! We are greatly in need of helping hands ages 12 and up, so bring the whole family in for a fun day making a difference.

Suzanne, our Women Fighting Hunger Programs Co-Chair, was first introduced to CFBNJ by her mom, Joslin, a committed donor and faithful warehouse...

.@NJDHS delivering food assistance to children who missed free/reduced-price meals due to #COVID19
✅Benefits being delivered to #SNAP ...households
✅Electronic cards being sent to those not in SNAP
✅Check balance: https://t.co/jS00ng1zEm
✅Visit https://t.co/qGZKaf728l for more

Households need ...Congress to #BoostSNAPNow in #COVIDRelief to help put food on the table for as long as COVID-19 is a threat & the economy is stalled: https://t.co/8fKr3oS65I