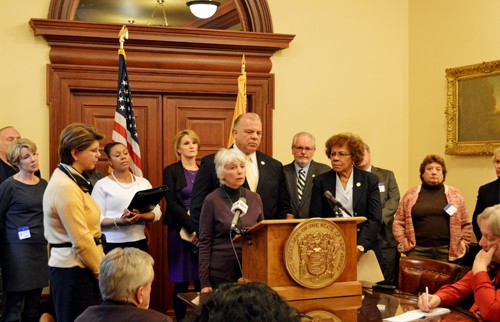 The FoodBank returned to the statehouse on Wednesday, Feb. 10, to discuss cuts to the Supplemental Nutrition Assistance Program, including the removal of waivers for the Able-Bodied Adults Without Dependents rule.

The press conference, initiated by Senate President Stephen Sweeney, addressed the need for immediate action to help the 11,000 New Jerseyans at risk of losing their food stamps.

Gov. Chris Christie’s call to end ABAWD waivers at the start of 2016 means that by March and April those who do not work or are not enrolled in a job-training program will lose their benefits. If waivers are not implemented before then – or if those at risk do not find work or get job training – they will need to wait three years to reapply for food stamps.

“It’s critical we move forward and get waivers to help people transition,” Sweeney said to the anti-hunger advocates and New Jersey Senate Democrats in attendance. “We need to move now.”

Sixty-eight percent of states have approved ABAWD waivers. But, New Jersey is one of the 16 without a waiver, not even a partial one that applies to specific areas.

“[Hunger] should not be a political issue or a social issue,” Sen. Shirley Turner said. “We should ensure families [and] seniors have the food they need.”

CFBNJ’s Director of Advocacy Diane Riley shared her thoughts about the current situation.

“It’s a myth to think people who go to pantries are not working,” Riley said, as almost half of the FoodBank’s clients have jobs.

SNAP cuts are the “wrong decision for those who are struggling,” said Serena Rice, executive director at the Anti-Poverty Network. “Now, they’re going to lose their one source of income for food.”

You can contact your elected officials to help end cuts to SNAP. To learn more, click here.