Fuel To Make A Difference 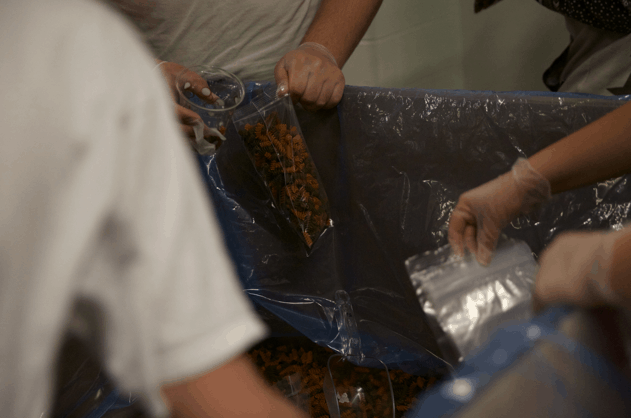 Too many New Jersey children don’t know where their next meal will come from. Mark Cortazzo understands this feeling of uncertainty because he grew up in a food insecure household. Today, Mark is a senior partner at MACRO Consulting Group and has dedicated his life and work to giving back.

“When I was growing up, I lived in a single parent household and my mom was ill for a while,” Mark told us. “She had to go out on disability and she didn’t make very much money in her day-to-day. We often got help from our local food bank.”

The food they received to supplement their budget “took the edge off a difficult financial situation.” They often sacrificed many other necessities for food. Mark said he and his mom were fortunate because they had a strong support system, but he added that “not all people are so lucky.”

His childhood struggles inspired his commitment to the fight hunger. He started a tradition at MACRO to support the cause; every time someone opens an account, the company makes a donation to the client’s local food bank.

“In lieu of sending gift baskets, we make a gift to charities to impact lives,” Mark explained. “Hopefully it will also inspire our clients to give back and help people less fortunate than themselves – a powerful outcome.”

For the holiday season, he and his colleagues organize a “Christmas Spectacular” of sorts by handing out gifts to seniors at a local center.

“You see how happy it makes them,” he said, “and that’s what keeps us going.”

Mark extends this culture of giving among his children, who volunteer at the Community FoodBank of New Jersey.

Hunger hits close to home for Mark and, in addition to his commitment to the cause – through volunteering, donating and advocating – he hopes to inspire people to give back to those in need.

“I would like people to see that you can come back from adversity,” Mark said. “Hopefully somebody reads that and says, ‘wow, if I’m in that same situation, I can use this as fuel to make a difference.”

Lightbox link for post with description I'm excited to serve as a panelist for...

I'm excited to serve as a panelist for @NJCUniversity's Hunger Summit on Monday 5/18, representing @CFBNJ at this important statewide ...symposium alongside two hunger heroes whom I greatly admire, @SpeakerCoughlin & @AdeleHLaTourett. @HungerFreeNJ

Lightbox link for post with description Your gift before midnight on 5/15 will be ...

Your gift before midnight on 5/15 will be TRIPLED, giving hope to children and families this spring. Make a gift now! #FoodHelpHope ...https://www.cfbnj.org/#0521triplematchorganic

Lightbox link for post with description Your gift before midnight 5/15 will be tripled!...

Your gift before midnight 5/15 will be tripled! Please make a gift now to give hope to our hungry neighbors this spring. #FoodHelpHope Give here: ...https://www.cfbnj.org/#0521triplematchorganic

Lightbox link for post with description And that's a wrap! CFBNJ's first-ever virtual ...

And that's a wrap! CFBNJ's first-ever virtual Blue Jean Ball just concluded and was a huge success, raising funds to help us continue our ...response to the unprecedented need in our state in the weeks and months to come. Congratulations to our FOOD, HELP, and HOPE honorees, who were recognized this evening for their exemplary support of our mission!

If you weren't able to join us tonight, you can still help out: https://give.cfbnj.org/campaign/blue-jean-ball-fund-a-mission-2021/c335789

Lightbox link for post with description Ok. It isn’t every day that @jonbonjovi ...

Ok. It isn’t every day that @jonbonjovi performs just for you - the @CFBNJ - that is. Let’s give help, hope and donate now to fight #hunger.

Lightbox link for post with description The 2021 #BlueJeanBall is coming to a close with...

The 2021 #BlueJeanBall is coming to a close with the moment we've all been waiting for - a headlining performance by NJ native and champion for ...hunger-relief, @jonbonjovi! #AllinDenim

NJ legislator & hunger hero @SpeakerCoughlin reflects on this year & thanks those who have supported CFBNJ & made the #BlueJeanBall a ...success. #AllinDenim

"I'm so grateful to the volunteers & donors dedicated to helping their neighbors in need get through these difficult times."

Lightbox link for post with description "The HELP award is indicative of the true...

"The HELP award is indicative of the true partnership that we at @NJ_PRF have shared with our on-the-ground providers, particularly the ...Community FoodBank of New Jersey,” says HELP award honoree, @FirstLadyNJ Tammy Snyder Murphy. #AllinDenim #BlueJeanBall