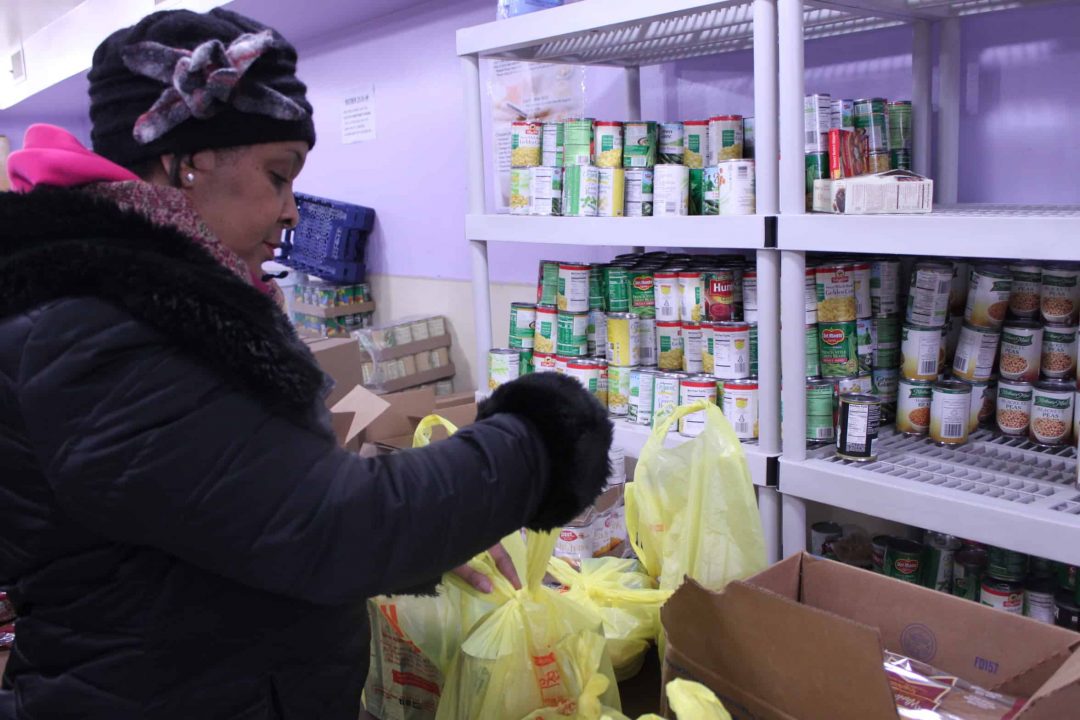 The government shutdown, poised to become the longest one in U.S. history, has left approximately 800,000 federal workers in financial limbo. More than 5,000 of these employees live in New Jersey. Many have continued to work without pay, while others stay at home waiting for a resolution to the impasse. Today marked their first missed paychecks, paychecks that they rely on to support themselves and their families.

In some cases, the furlough has forced government employees to tap into their savings, rely on credit cards, or crowdsource funds to make ends meet. Many have turned to their local food pantries and soup kitchens to put food on the table.

Kimberly Paige, who has worked for the IRS as a Program Assistant for thirty years, is one such employee in need of extra help because of the shutdown. This morning, she visited Elizabethport Presbyterian Center, one of the FoodBank’s partner agencies that has opened its doors to furloughed workers, allowing them to skip the line and make their food selections in private to avoid the embarrassment that many of them feel.

Sonia, a Program Assistant for the TSA for fifteen years, is another furloughed worker who visited a food pantry for the first time this morning. She has been watching the news every day, waiting for the shutdown to end.

“I paid this month’s bills with some money that I had left from last month, but my bills for February–that’s the question,” she said. “It’s scary for me because I’m the head of my household, and I have a lot of responsibilities.”

At the Community FoodBank of New Jersey, we know all too well that hunger can strike at any time. Sudden loss of pay is one possible emergency that can bring someone to a food pantry, and those who struggle to make ends meet are often forced to make tough choices, like deciding whether to pay for housing or food. According to a 2017 report by the employment website CareerBuilder, 78% of American workers say that they’re living paycheck to paycheck.

The FoodBank’s resources are already stretched and will become even more strained if furloughed federal employees in New Jersey, like Kimberly and Sonia, continue to miss paychecks.

To make matters worse, the FoodBank will not be able to close the gap for nearly 800,000 New Jersey SNAP recipients if the shutdown drags on and they lose their benefits. For every one meal provided by food banks nationally, SNAP provides twelve, according to a Feeding America estimate. Though SNAP is managed by the state, the funds for monthly assistance are provided by the federal government. Today, the New Jersey Department of Human Services announced that it will issue February benefits early, but the availability of funds for March is unknown at this time.

Families that receive supplemental food via federal programs like SNAP are often forced to visit food pantries and soup kitchens at the end of each month, once their income and benefits have run out. If the federal government remains shut down, the FoodBank anticipates heightened need all month long, with more people in need of a limited amount of food.

The Community FoodBank of New Jersey is here when our hungry neighbors need it. We partner with more than 1,000 organizations, like Elizabethport Presbyterian Center, that help us get nutritious food to people in need in their communities.

“This furlough is scary,” said Kimberly Paige. “You have mortgages, rents, families to take care of. Thankfully, I can come here and get some food, and that money that I would’ve spent on food I can spend on paying certain bills that I need to pay.”

Make a donation to help the Community FoodBank of New Jersey keep up with the increasing need in our state.