Veterans Day comes around once a year to commemorate the men and women who served in the military. These individuals answered the call of duty to protect this country and its freedoms.

It is now time for us to help our veterans in need.

There are more than 19 million veterans in the U.S. and nearly 1.4 million of them struggle to make ends meet, the government reported. More than 19,000 of those below the poverty line are in New Jersey.

These veterans survived combat, but returned home to another war. They fight against their own hunger.

What the numbers come down to is truth that hits close to home. One in five Community FoodBank of New Jersey client households has a member who has served or is serving in the military. 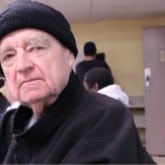 “I just thought it would be a nice place to try, to get to see what it’s like,” Perlberg said about his first visit to the soup kitchen.

Perlberg has his meals at Toni’s Kitchen, as well as at the Salvation Army across the street, most days of the week.

“It helps to conserve on my food bill,” he added. “I like the food that they serve. It’s very good.”

Another veteran and guest at Toni’s Kitchen, James H. Williams, enlisted in the Army and served during the Korean War. He later worked alongside his father in the moving business, which he took over.

Williams said that while on the job, his coworker recommended they grab lunch at Toni’s Kitchen. That was in the 1990s. 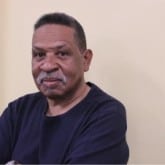 “There’s not too many places you can go where you can sit down and chit chat with people and have fun,” Williams said.

Since his first visit, he has continued to return to the local soup kitchen for the food and the people.

“They’re lovely, they’re very considerate,” Williams said about the staff and volunteers. “They look out for you. You get your blood pressure monitored, blood glucose monitored; they care about your well-being and I think it’s a good thing.”

That is where CFBNJ and other organizations that help the hungry come in. That is also where you come in! This Veterans Day, you can do more than just remember those who served and are serving. You can express your gratitude and do something to give back.