“This is an Opportunity”

Students come to our Food Service Training Academy from many different backgrounds, and Aflowa Zaza, who joined the 16-week class that began in June, is an example of that.  Aflowa came to the U.S. from Liberia some 30 years ago, when her native country was embroiled in an uprising.  She went to Baruch College, had two sons, and spent more than two decades in corporate accounting.  She was laid off from one job after 16 years, then found another position, only to face a new round of restructuring six years later.  Out of work for many months, and finding it hard to get a new job in her mid-50’s, Aflowa decided she needed a new opportunity.  She knew a lot about making the most of opportunity.  One of her sons is a Harvard graduate.  The other studied at Rutgers.  Now, Aflowa, who already loved to cook, realized she needed new skills.  “I have gotten to learn a whole lot from the class,” she tells us.  She’s gained knowledge of commercial kitchens, cooking on a large scale, and baking.  Almost halfway through the course, Aflowa says she is excited about the future, and told her sons, “If you can hold me up until I get through this…I really see myself on a new path.  I love hospitality.  I love entertaining.  I love cooking.”  She says the program can be intense, but, “the best part is, after everything, you know that people enjoyed the meal.”  She’s grateful for the FSTA.  “I just want to thank the staff and everyone here for just helping us out, taking people from all walks of life and then giving them a second chance.”  And Aflowa appreciates all that the Community FoodBank of New Jersey does every day, noting, “There are so many struggling people out there, and to be able to feed people who don’t have food… As bad as things are, there are still people who are doing good in their own way.  That’s what makes America so great – that no matter what, how difficult it is, people still find a way to help others.”

Find out more about the Food Service Training Academy, and how to join an upcoming class, or hire one of our qualified graduates. 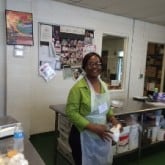 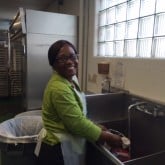